Port Kembla Coal Terminal operates two track-mounted operator-controlled bucket-wheel reclaimers that reclaim the coal from the stockpiles for delivery via conveyor belts to the ship loaders.
Kembla are installing a new reclaimer and demolishing the existing Reclaimer which is to be removed from the stockyard over a bridge and transported to a dedicated demolition area.
This project required a way of weighing the existing Reclaimer before taking it over the bridge to ensure the calculated load was as expected and did not compromise any infrastructure.
Kembla had looked at a number of options for weighing the Reclaimer including putting in weighing jacks. This did not provide a solution for wheel loads which was an important factor and was also expensive and time consuming.
Trakblaze was contacted and were able to offer a much more cost effective and solution. This involved the hire of 2 of our Mobile Train Weighers (MTW) units to provide individual wheel loads for each axle on each of the 2 rails.
The MTW is a flexible solution for weighing all types of vehicles that run on railway lines, taking approximately 15 minutes per unit to install. As each wheel engages the system, the tyre of the rail wheel is lifted slightly and the load transferred to the wheel flange. Once
weighed the wheel is guided off the system and back on to the rail wheel.
Each wheel was weighed 2 times in each direction and on completion the estimated total load calculated was almost exactly mirrored in the weighing results.
The technical know-how provided by the Trakblaze team , to offer this solution, proves once again that Trakblaze are a world leader in providing weighing solutions to the Rail, Mining, Road and Aviation sectors. 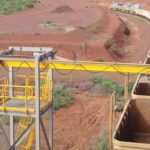 Friday, 02nd December Trakblaze Global are now proud to release a rail industry specific volumetric scanning system that is revolutionising the loadout speed, accuracy and volumetric measurements of each train ore wagon. The RVS.....
NEXT >